Authorities say it could take weeks or even months before they finish their investigation of a boating accident in the “Playpen” near Navy Pier that severed a woman’s feet, and it’s unclear what if any safety recommendations might come out of it.

“Anytime something like this happens, we go through a process looking at safety measures in the investigation,” Coast Guard Lt. Rachel Ault said. “The investigation may lead to safety recommendations on how to prevent future incidents from occurring.”

The Playpen has been a staple of the downtown boating party scene for years, but its location in federal waters has kept it out of the city’s regulatory crosshairs. Although the city considered an ordinance last year to tamp down on the rampant partying, few other ideas have been offered to improve safety there.

“It’s a very small area with a lot of boats that want to go in every weekend,” said Ryan Remsing, manager of Chicago area boat rental company SailTime. “That multiplies the danger: moving people, moving boats. That’s an area that’s going to have accidents because there’s so much boat movement.”

Saturday’s accident happened around 5:15 p.m. as the captain of a rented yacht struggled with a malfunctioning anchor.

The captain, a 70-year-old man, was attempting to anchor in the Playpen but the boat’s windlass malfunctioned and the boat began drifting, according to Jayette Bolinski, a spokesperson for the Illinois Department of Natural Resources.

To correct the drifting, the captain placed the boat in reverse and it smashed into a floating raft connected to another boat, Bolinski said. Some people on the raft fell into the water and two of them got caught in the yacht’s propeller. 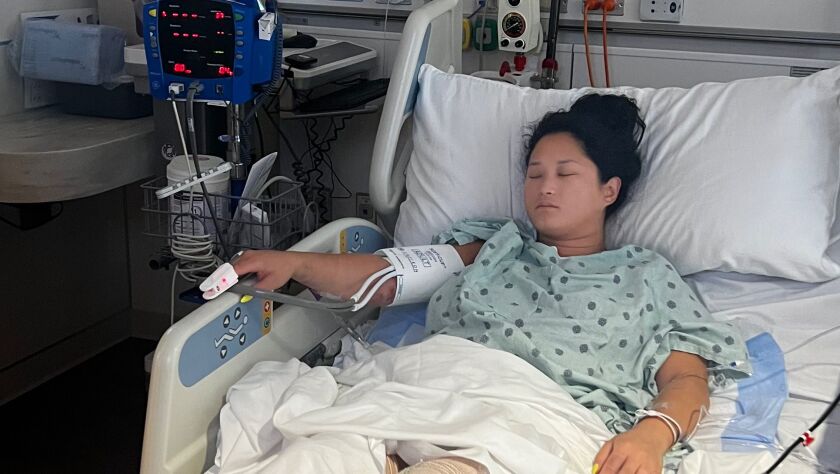 Lana Batochir was injured when a boat backed into a raft Saturday afternoon at the Playpen.

Lana Batochir, 34, lost both her feet. Her husband pulled her from the water, she said, likely saving her life. Another woman, 28, lost part of a finger and suffered a laceration to her forearm, Bolinski said.

Investigators with the Coast Guard and the Natural Resources Department are interviewing more than two dozen people. Any potential citations or license suspensions — or safety recommendations — won’t be issued until the investigation is finished, Ault said.

The Playpen is a federal anchorage area, where boaters can stay all day and overnight if needed. It has no capacity limit, but authorities can use other laws to control how dense the area gets with boats, according to Illinois Conservation Police Sgt. Joshua Mooi.

“There’s not a lot that can be regulated as far as how many boats and where,” Mooi said. “There’s some things we do to cut down on how dense the population of boats and people are.”

That includes enforcing the buoy line along Ohio Street, the border of the anchorage area, and issuing citations when boaters speed or are reckless, Mooi said.

Most of the laws broken in the Playpen are not related to rowdy partying. The most common citations are for not having enough lifejackets, missing boat registrations and operating a boat without lights after dark, Mooi said.

“Chicago is lucky enough that the Playpen is both a blessing and a curse,” Mooi said. “We know it’s going to be a mess of people with a lot of boats and there will probably be accidents. But we’re lucky that it’s an anchorage area that allows people to drop anchor and sleep on the boat” until they’re sober enough to leave safely.

As far as preventing similar accidents in the future?

“There’s definitely enough laws on the books that cover those areas that should prevent accidents from happening,” Mooi said. “Specifically for this accident, we probably won’t know what would fix this until they do these interviews and finish the investigation, which could take a couple weeks.”

Cop Who Died During Bike Accident Was Pinned Under Truck Tire: Police

Cop Who Died During Bike Accident Was Pinned Under Truck Tire: Police

Medical examiner called to accident on I-79 in Harrison County